The most beautiful time of the year

As far back as January, when we learned it would be three of us opening up our stockings on Christmas morning this year, we knew that the festive season would be extra special this time around. As I have found with a great many things since Thea arrived, those traditions that you’re so used to experiencing the same way, year in year out, suddenly take on a whole new significance when you have a little one in tow. I’ve never really been one to have to have the biggest pile of presents under the tree to be happy, but this year I even managed to forget that I had any to open, I was that wrapped up in watching Thea receive gift after generous gift from friends and family. Albeit oblivious to the procession of prezzies and swelling of our usual collection of cards from around the world, she certainly enjoyed the toys once they were out of their packages, and looks simply adorable in all the cute clothes that she was given.

Of course occasions such as Christmas tend to spawn a plethora of themed clothing for both adults and kids alike, and there was no way we were going to miss the opportunity to get some embarrassment ammunition for future events such as 16th birthday parties, or when her first boyfriend comes to meet the parents. There was the Santa’s Little Helper costume (click here for previous post), a podgy Christmas pudding top, and some cute Fair Isle leggings, but my favourite has to be the mini Santa outfit which we used as the picture for our first Xmas message to friends and family. 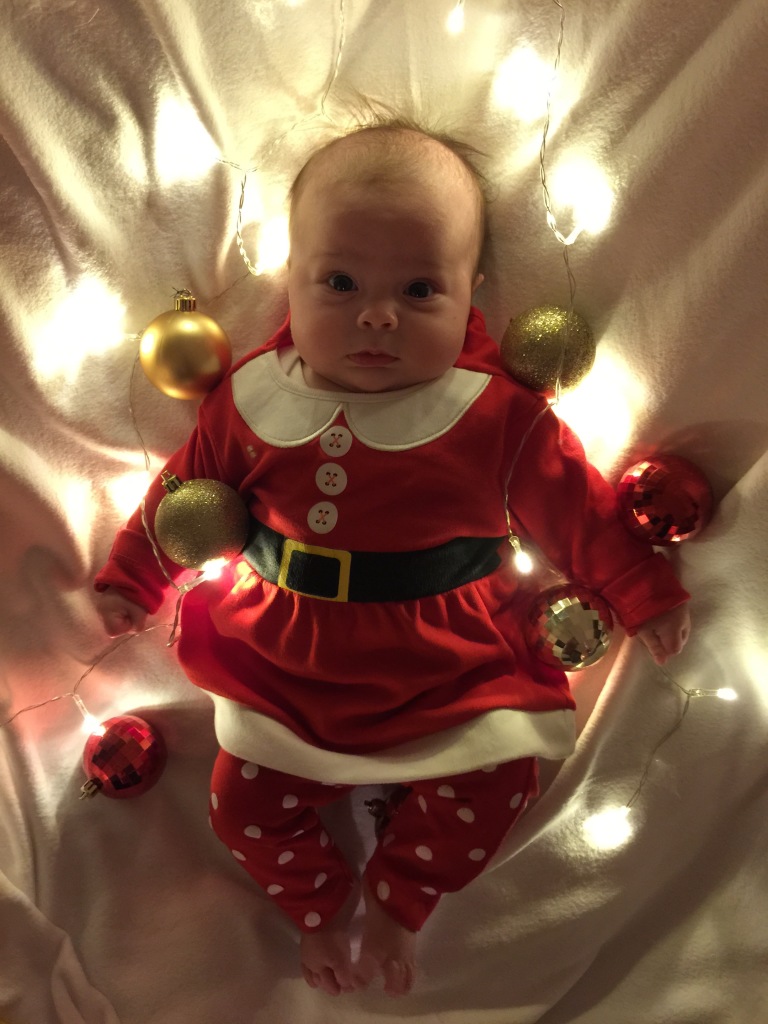 I think we have had more visitors this year than ever before, although I um under no illusion that they were coming to see us! Both Gem and I are so grateful for all the love and support that we have received this year. From the moment we announced we were expecting, our friends and family have been nothing short of amazing and if you are one of them, and are reading this, we thank you from the bottom of our hearts. We have got quite a lot going on in our lives right now, both good and not so good, but times like these help you put things into perspective and realise how lucky you are. Seeing my Dad bounce my little girl on his knee and the sheer, uncomplicated, unadulterated joy on both their faces is something I’ll always remember. 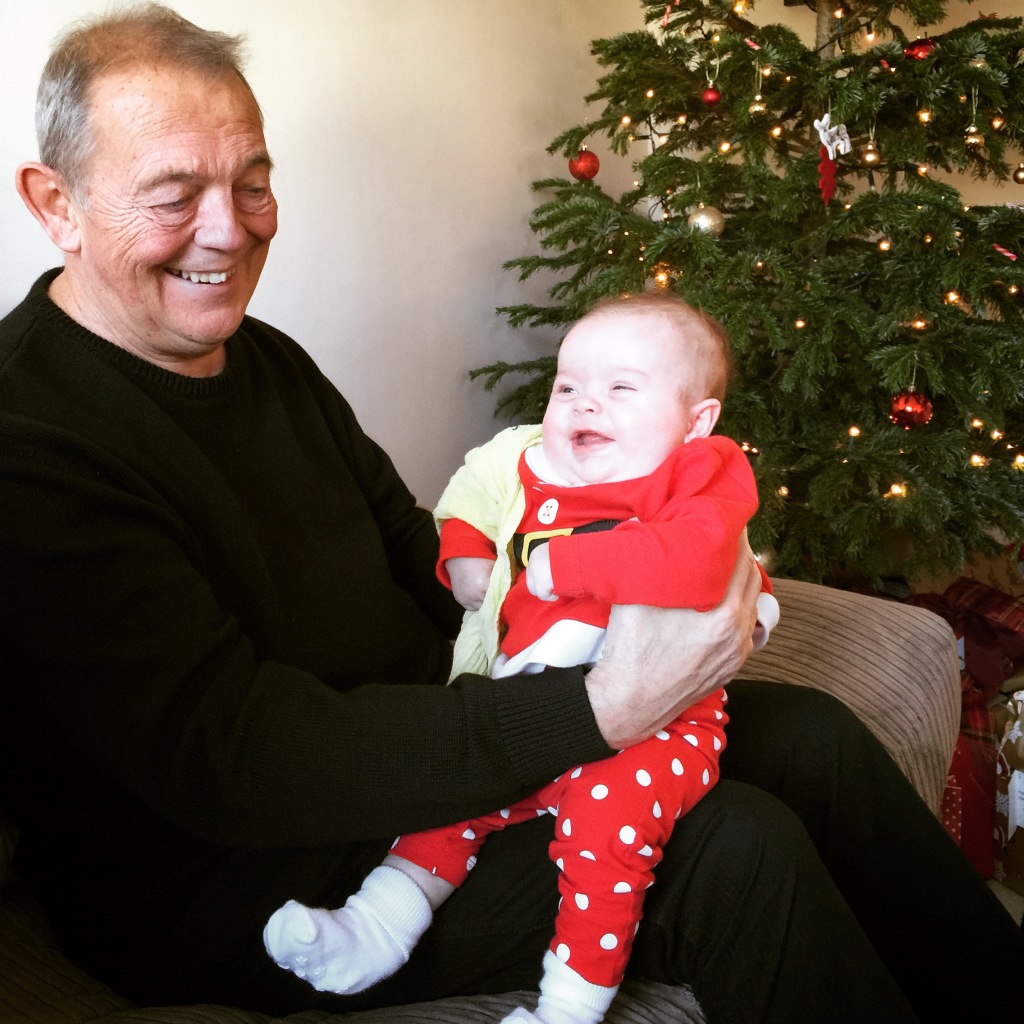 Even though we’ve all been struck down with miserable colds over the last week, the mood in the house has remained cheerful throughout – the fun starting at 8am on Christmas morning when Thea finally woke from her slumber and joined the party with a Xmas selfie… 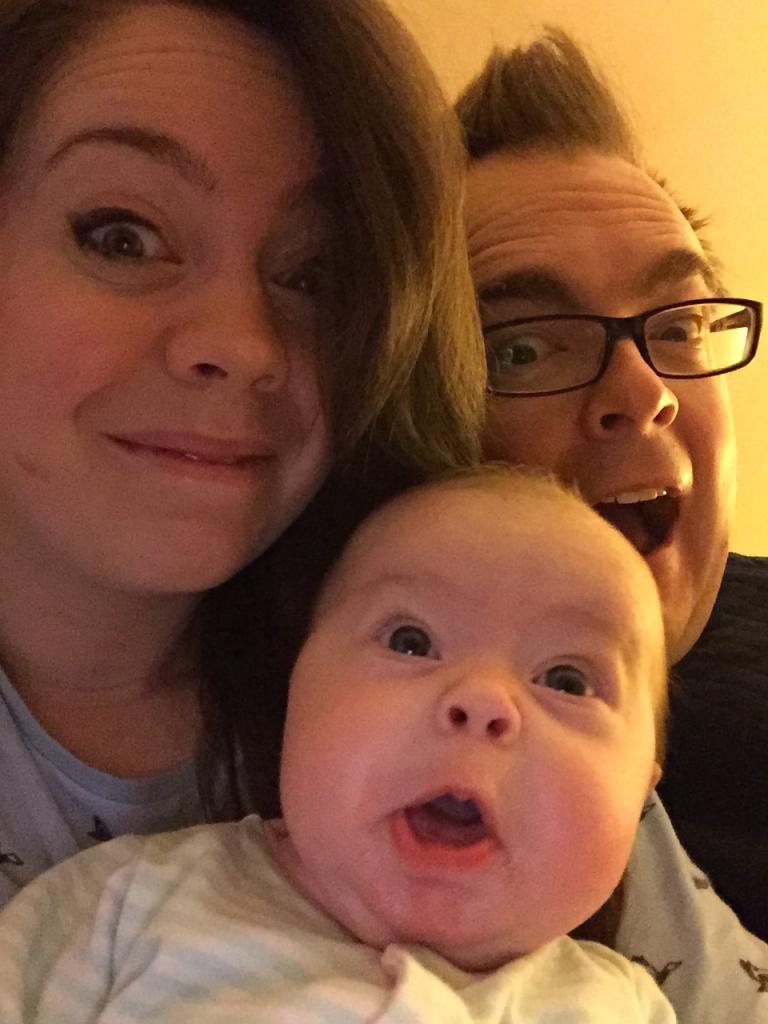 There were six of us around the table for Christmas dinner while Thea caught up on some well-earned sleep, and over the following few days we managed to see lots of family and friends. I’ve always had a relatively small amount of family members near at Christmas time but that has changed since being with Gem, and I thoroughly enjoyed a Christmas with a real family feel to it. I think this year will always have a special place in our hearts as our first Christmas as a three, and I know I will remember it for many years to come. 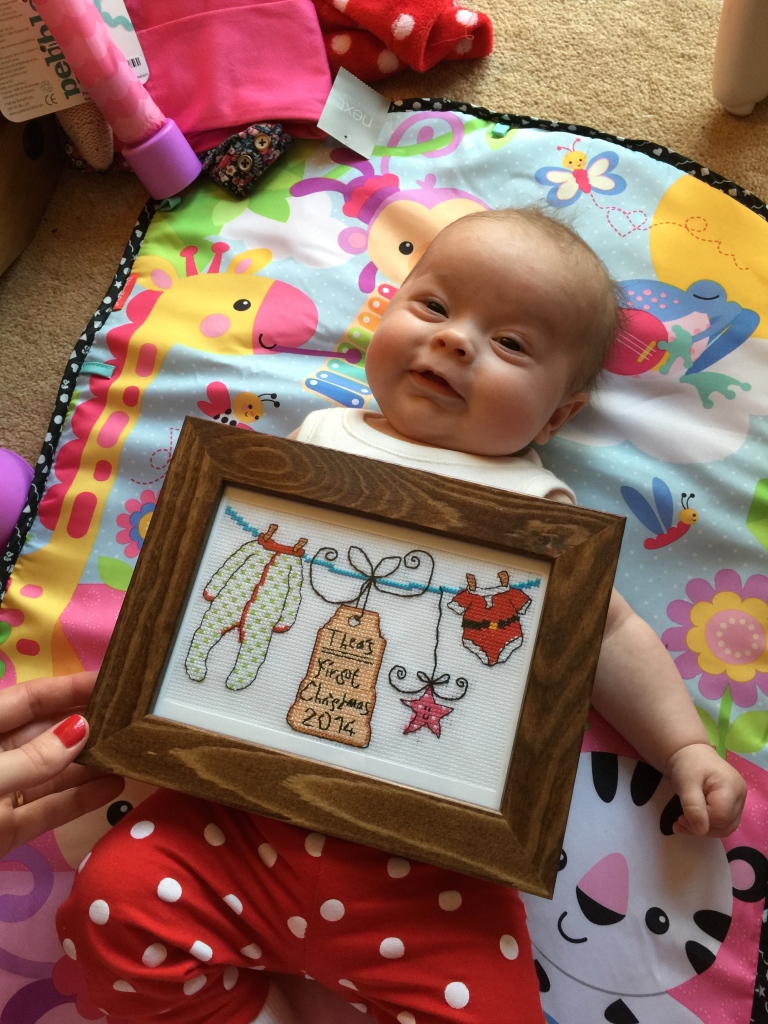 Wow! Where have the last 8 weeks gone? It seems like only a few days ago that we were bringing Thea back from the hospital and standing in the doorway of our lounge, staring at each other with a look of “what the hell do we do now?” slapped right across our faces. Since then it has been quite a journey, with new experiences coming thick and fast, every one of them opening my eyes just a little more to what it means to be a parent. This morning Thea and I spent our first morning alone together as Gem headed off to terrorise the highways and byways of Wiltshire in a driving lesson. Originally I had planned this post to be just about this experience – the first time in 38 years that I had been solely responsible for someone so small and dependant. I guess I had built it up in my head as being something that would be traumatic rather than enjoyable, but the reality of it was that I loved sharing those two hours with the little one we’ve come to affectionately refer to as Chunk. It is genuinely amazing how she can raise my spirits, even at the lowest of lows.

When Gem returned, with both her and the driving instructor unscathed, we decided to bring a little Christmas cheer to the house and set off for Allington Farm Shop to get our tree. Normally we have an artificial one which is great, but for Thea’s first festive season we decided the real deal was the way to go. After successfully conquering the logistics of transporting 2 adults, 1 baby in a car seat, 2 bags of shopping, a buggy and a 7 ft spruce in a T reg Golf, it was time to decorate. 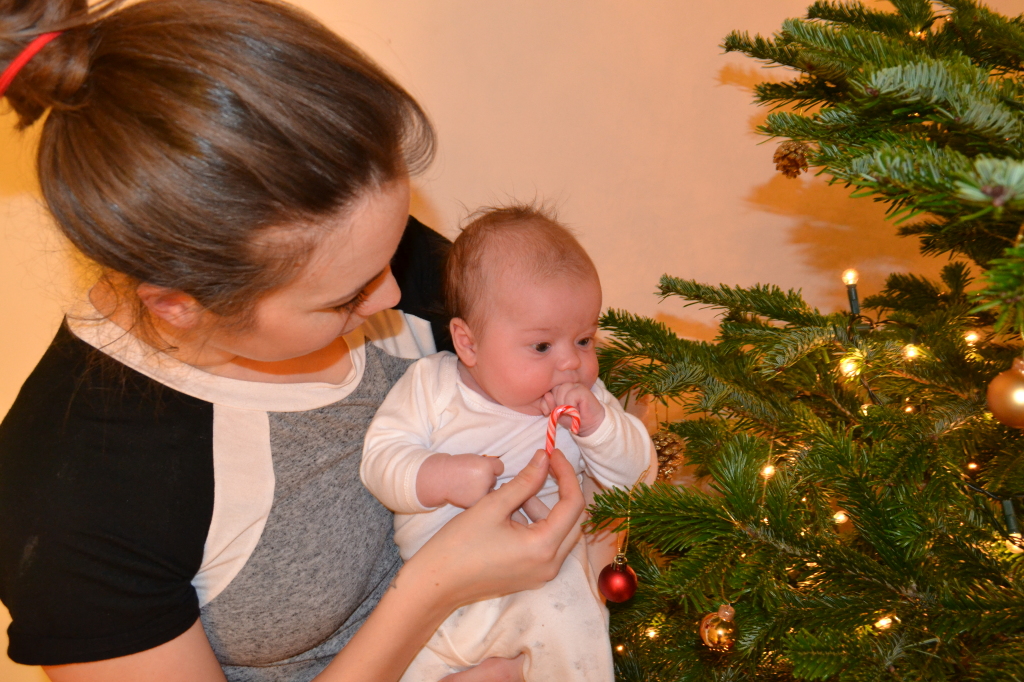 To be fair, I left it to the experts and Thea enjoyed watching Mummy illuminate the spiky branches, totally mesmerised by the flashing lights. After the peppermint candy canes had been hung and the final bauble was gently swinging away, came the moment we’d been waiting for as I “helped” Thea place her first ever decoration – the star on the top of the tree that will now be our little tradition every year. 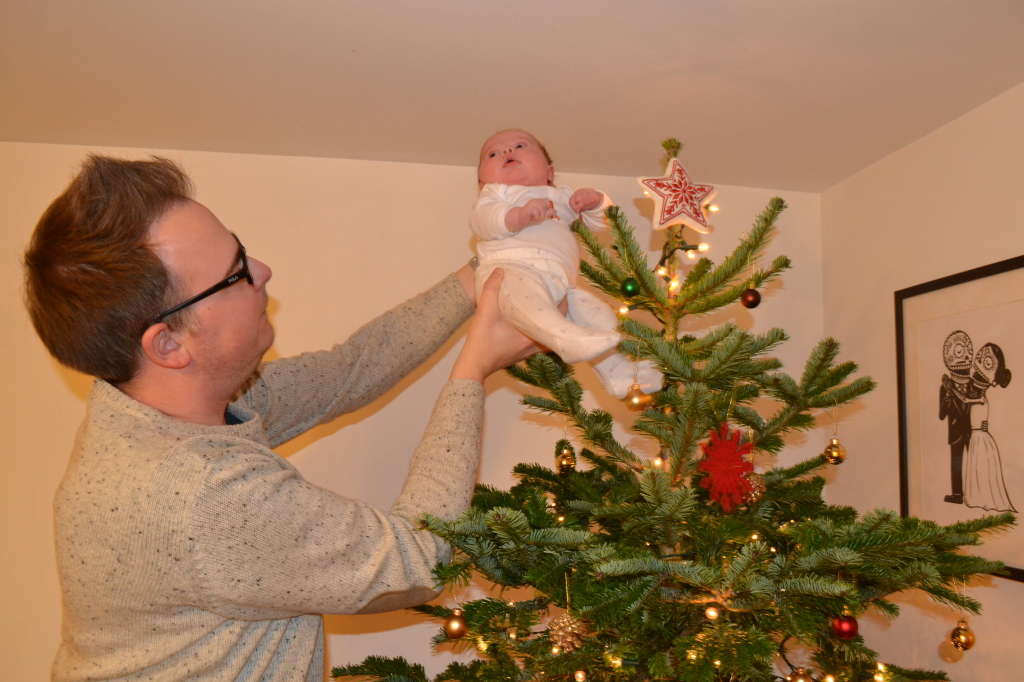 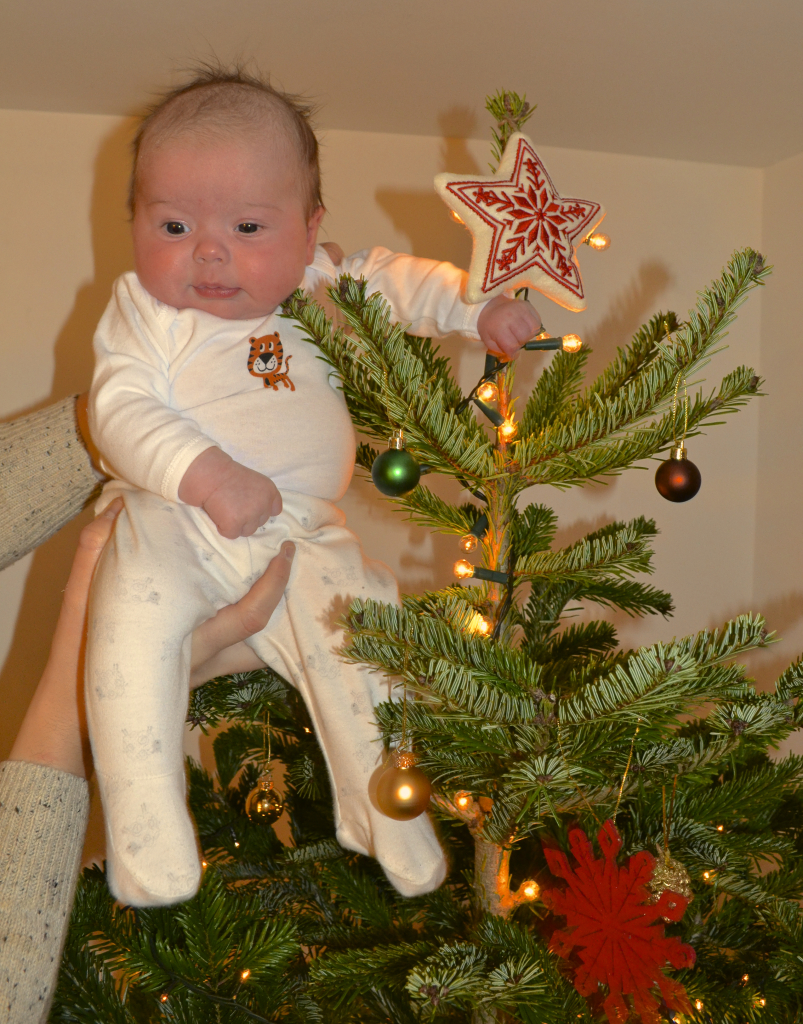 Gem has done an amazing job of making it Christmassy in here – bunting, baubles, wreath, pine cones and scented candles are all all serving as a welcome distraction. It really does feel festive, albeit only 4 days into December. 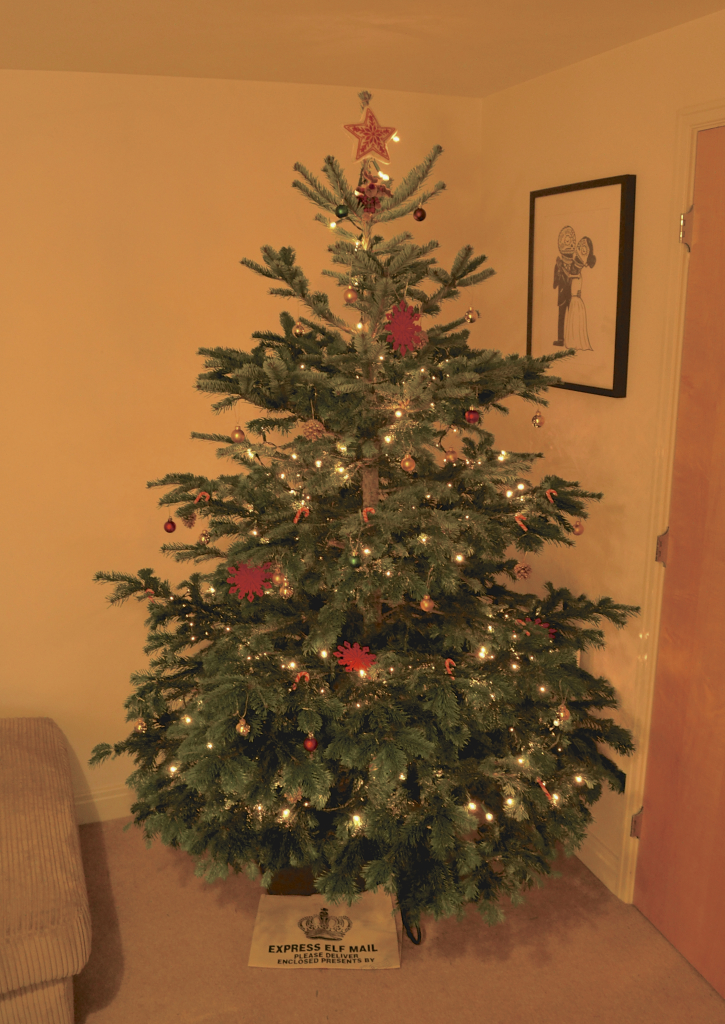 So now we begin the countdown. It’s strange, it has been a long time since Christmas seemed this important to me. The last few years have been different – since Gem and I got together it has definitely taken on more significance, but this year even more so. I’m looking forward to the 25th, and I can’t pretend that a large part of it isn’t down to being able to see Thea wear this again… 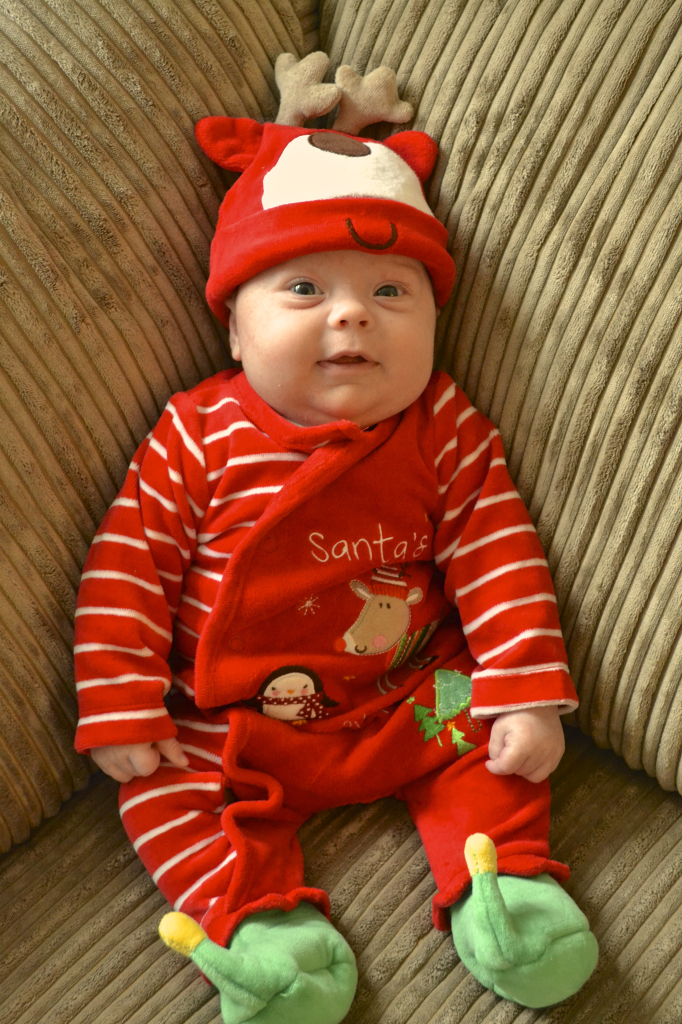